This is Why We Garden

You are here:
Gardening 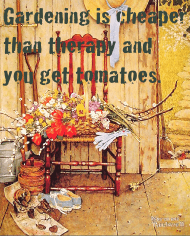 Tomatoes. Is there any better reason to have a garden? Our tomatoes have done fairly well this year, despite a cooler June and two months of drought followed by two weeks of heavy rains. The tomatoes showed a little wear–delayed ripening, cracked shoulders and catfacing. Catfacing is a new problem that I’ve never seen before in my tomatoes. The Dr. Wyler’s Yellow and Nature’s Wonder were the two most prone to catfacing, which is caused by cool temperatures during blossoming.

So, here’s my report card on this year’s tomato crop:
Purple Prudens–Another good performance this year. The first to produce ripe fruit, always a reliable tomato.
Production: A Flavor: A+ Blemishes/Appearance: B Overall Grade: A
Amish Paste–another good year for this reliable tomato. Less cracking this year than in previous years, but instead we had some yellow shoulders.  Yellow shoulders can be caused by bad weather, low potassium or high pH. We definitely have high pH and the weather wasn’t so great. I’m not sure about potassium, so maybe I’ll have the soil tested this fall.
Production: A+ Flavor: A Blemishes/Appearance: B Overall Grade: A
Black Krim--took off well, blossomed well, but kind of struggled during the heat wave. Definitely likes milder summers. Still the best tasting tomato of the bunch. Production: B- Flavor: A++ Blemishes/Appearance: A- Overall Grade: A
Lillian’s Yellow 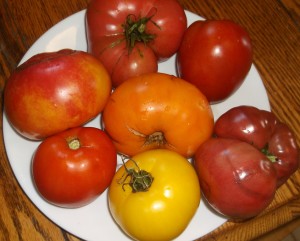 This website helped me identify most of the tomato problems we experienced this year.

From this year’s planting I’ve gotten about 5 bushels of tomatoes (maybe six, because we were picking small batches for quite a while before they started heavy production) and have gotten plenty of salsa, canned tomatoes and dried tomatoes. The two bushels I brought in today will be frozen to make sauce later on this fall. I expect to get at least another two bushels from what’s still on the vines. 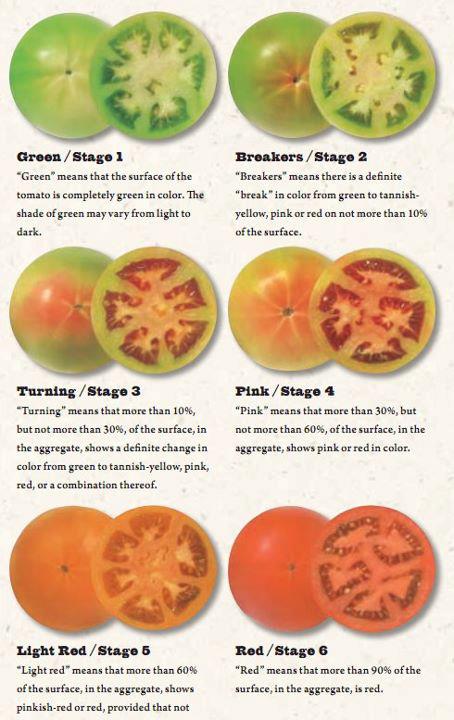 But now we are living on borrowed time. A good frost can come any day now. If it’s only going to be a mild frost for a day or two (or three), I’ll cover the plants at night with blankets and we’ll get lots more tomatoes before everything dies. But eventually we will have to give in to Mother Nature and pick everything that’s still on the vines.

In order for a tomato to ripen after it has been picked, it had to have started the ripening process while on the vine. The chart on the right shows the various stages of ripening. If there is no hint of white or yellow (as in Stage 1 in the picture) then the fruit has not started the sugar exchange process that ripens the fruit. No matter how long you wait, this fruit will never ripen after it has been picked. I know. It’s sad.

Not only that, tomatoes are much slower to ripen after picking than when they are on the vine. If the fruit is bruised or damaged during picking or storing, it could very well rot before it is completely ripe.

So, once my tomatoes are all in at the end of summer I sort them into three groups: ripe or almost ripe (to be processed right away), undamaged fruit that has begun ripening (to be eaten at the table as they ripen over the next few weeks) and green fruit or fruit that is damaged and needs to be used right away. Sometimes I’ll have as much as a bushel of in this third category.

If all goes well, we will be eating tomatoes for weeks to come. This is why we garden.

Starting Your Garden: Hardening Off
April 7, 2021

Disclosure: Some of the links on my website are affiliate links. This means that, at no cost to you, I will receive a commission if you click through and purchase the item.